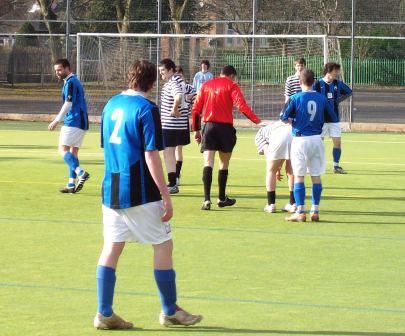 14 consecutive defeats, 99 goals conceded and sordid allegations about the private lives of club stalwarts; it's been a difficult season for everyone at QPSFC but things finally came good on a cold February's morning at Holyrood, as the Spiders trashed Troon 9-2 to pick up our first win since September.

Despite the freezing weather the Holyrood pitch had held up well and boss Iain Campbell named a strong side from the start versus our opponents from Ayrshire. Martin was in goals with a back four of Davie, Jack, Crossers and CC in front of him. Ally Mc, Stuart, Craig and Adam made up the midfield whilst Ally Dick partnered top scorer Paul up front.

Queen's started the brighter and Adam was causing a few problems for Troon up the left, he set up Ally Dick for a snapshot from the edge of the box but the away keeper made a smart stop to deny him. Craig fired a shot just wide soon after as QP continued to threaten. It was the visitors however who managed to take the advantage. Martin's punt was uncontested in the middle of the park and a neat through ball allowed a Troon forward to run through and smartly tuck the ball under the onrushing Kelly.

Our heads had gone down so often this season after the concession of the opening goal but we plugged away this time and deservedly equalised five minutes later. A poor goal kick from the Troon keeper allowed Stuart to slip in Adam, the winger's through ball found Ally D in behind the defence, and he slotted the ball past the keeper and into the net. Ally Mc almost put us in the lead but his trickling header was well cleared off the line. We did gain the lead we deserved five minutes later.

Paul showed some great trickery to beat two players on the left hand side and his left foot cross to the back post was well met by the foot of Ally D to make it 2-1. We didn't loosen up there and our continued dominance helped us into a two goal lead before half time. Dick slipped the ball past a couple of defenders and into the box, before Paul arrived just on cue to slam it past the keeper.

Mr. C was a happy man at half time and he made a couple of changes to freshen things up, off came Stuart and Ally Mc to be replaced by Fraser Marr and David “LHD” Blair. Marr was the first to threaten in the second half, his 20 yard drive testing the keeper and winning QP a corner. We did make it four soon after, Paul on the score sheet once again. Long Haired David brought the ball down in the middle and his excellent through ball sent Joyce one-on-one with the keeper, the skipper composed himself before hammering it high into the net for his 15th of the season.

Mr Campbell made three further changes as the game moved away from Troon. Andy D, Andyboy and Calum Mac replacing Ally D, Adam and Crossers. It was soon 5-1. A corner from the right was headed towards goal by Jack Waugh and diverted past the keeper by Andyboy's left shoulder, two yards from goal. We continued the onslaught and it was 6-1 when David Blair did brilliantly to tuck Paul's low cross past the keeper from close range.

An exquisite long ranged lob caught Martin flat footed as Troon brought it back to 6-2, but midfielder Craig took the game by the scruff of the neck from here on, netting a late hat trick. It was 7 when straight from the kick off, McKenna floated past four Troon defenders and slid a great shot past the Troon net minder. He made it 8 with an excellent dipping shot from twenty yards and put the icing on the proverbial cake with a goal in the last minute. He picked the ball up in left midfield and outpaced the Troon right flank, before rounding the goalkeeper and sliding the ball home for another excellent goal.

A terrific win for all concerned, and the champagne got uncorked in the Social Club after the game. Next up for Queen's is the home match on Lesser Hampden against Dulwich Hamlet on the 6th March.

“A great all round performance with everybody playing well. I don’t know what clown suggested “Route 1” football but it never happened and the passing was the best we have managed this season.

It would be unfair to single anybody out but I will. Adam was outstanding, particularly in the first half, and Calum C made the left back position his own, well, until Wee Al returns.

Good to get some goals at last and well done to subs Maverick Blair and Mach McNaught for getting on the target, even if Mach’s hit off him ! Craig’s hat trick was spectacular against a tired team and it was nice to see it happen for us and not against.

Better mention Paul’s two goals as well or he’ll go in the huff and his partnership with Ally D was like turning the clock back to the days of Drennan and Raeburn.

It was also good that we didn’t let the loss of an early goal affect us and kept on trying to pass the ball and go forward.

Well done to Troon for playing the game properly with no moaning or whining, a pleasant change, and taking their defeat in good heart. There also appeared to be a bit of banter amongst the teams on the park which makes for a good afternoon.

We can now concentrate on the Dulwich game and some of our Legends will be returning to show off their silky skills. Should be a tremendous day and one to definitely look forward to.”